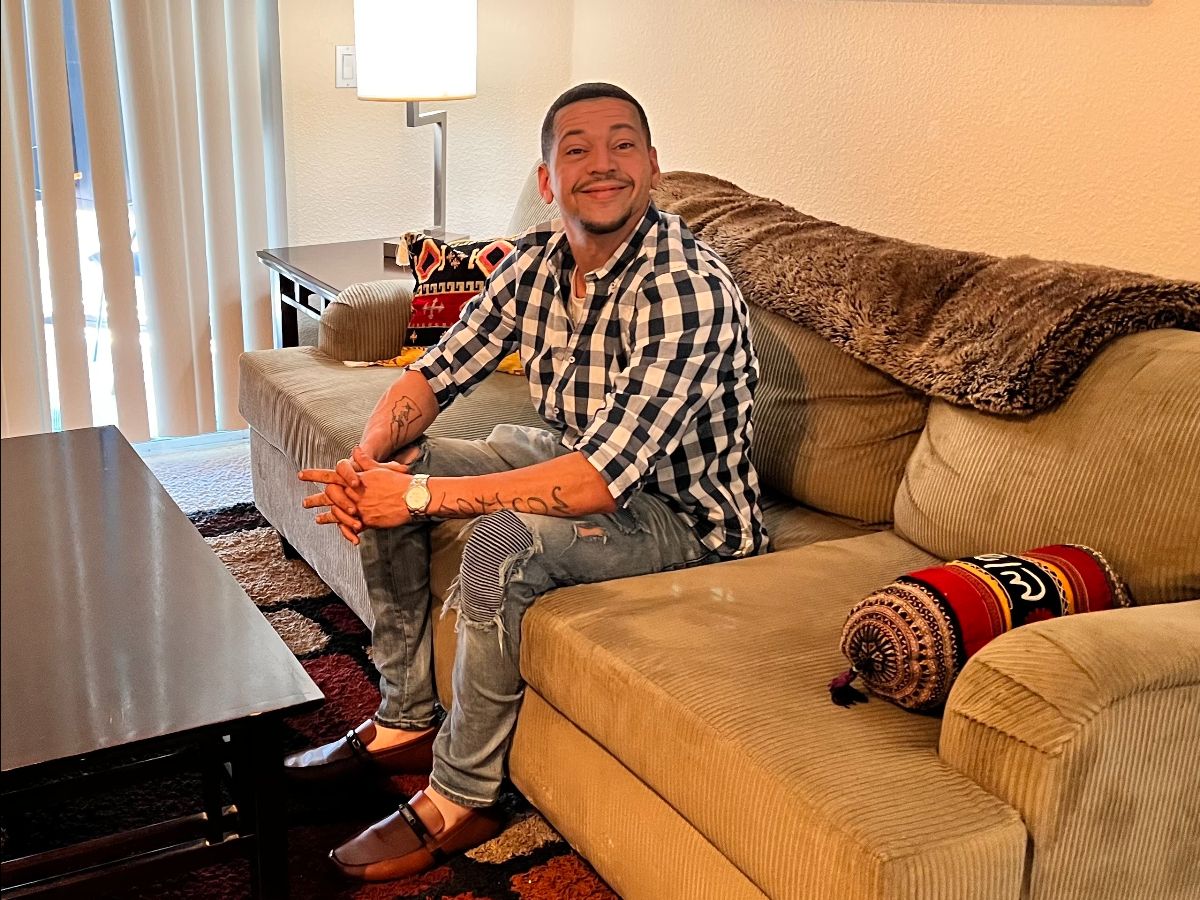 Home 1 is James's apartment; he was referred to Welcoming Home by Catholic Charities of Santa Rosa. To say that James' life has been incredibly challenging would be an understatement. He was put into foster care at a very young age, as his parents and caregivers could not provide a safe environment for him or his siblings. He didn't start going to school until he was seven years old. At school he began to flourish while playing sports and music. With the help of his foster mom, he was given a full ride scholarship to university and received a degree in Business Administration.

Then life took a series of difficult turns. He faced many abusive family relationships, and later, a debilitating divorce that cost him his home, most of his belongings, the business he had created and eventually led him to file for bankruptcy. He took the only things he had and moved to Santa Rosa, where he lived in his car for nearly two years. James was then able to find a room at Catholic Charities Family Support Center in Santa Rosa, where he also got a job in maintenance.

His work ethic, drive, and his college degree finally led him to a well-paying job as the maintenance supervisor at a local apartment complex. His boss at the complex noticed how hard working and committed he was, and found an apartment for him to live in.

With tears in his eyes, James expressed his gratitude towards Welcoming Home.  “These resources are really what I needed to get started on my life again. Thank you so much!”

Jessica was also referred to us by Catholic Charities of Santa Rosa.  She and her children are recovering from a very traumatic year. While Jessica was hospitalized and dealing with health issues, her 15-year-old daughter and 13-year-old son went to live with their father. During that time, their father suddenly passed away; Jessica and her children were left homeless. They spent seven  months living in a shelter.

But now Jessica and her children are settling into their new home. With a stable place to live, Jessica's five-year old daughter will be able to stay with them part-time. The older kids are excited to reclaim a sense of normalcy and want honor their dad’s memory by incorporating his favorite football team, the Raiders, into their room décor. The youngest daughter is really excited to have her own space for her unicorns and barbies.

Jessica is looking forward to creating a safe home for herself and her children:  “I’m so proud of us.  We did it!”

There were tears all 'round—and broad smiles— when Jennifer and her family saw their transformed new home. Jenifer said that this had been the hardest year of their lives and that it meant so much to them to have such a beautiful place to come home to.

Special thanks to Seniors4Students for donating one of their hand-made desks. The daughter loved it!

Margaret and Gary were also referred to us by Catholic Charities of Santa Rosa.  Margaret has lived on the street for 40 years and has never had her own home. Her two children and six grandchildren live out of state. Gary has lived in Santa Rosa for 10 years, the last six on the street with Margaret.

Their positive attitudes have pulled them through their hardships and will serve them well as they embrace their new living situation. They are thrilled to have their own apartment with their chihuahua, Sunshine. They love animals and the outdoors and are very religious.

Margaret and Gary were overwhelmed by their new home. They embraced for quite a while after starting to take it in. Favorite items were the bright colored comforter and rug, the beach themed bathroom, the original red and black painting for their kitchen and the three-inch high Chihuahua sculpture.

“We get to wake up to this every day! The bed is a piece of heaven. Now we both have drawers to put our things in!” They couldn’t stop smiling and were so appreciative.