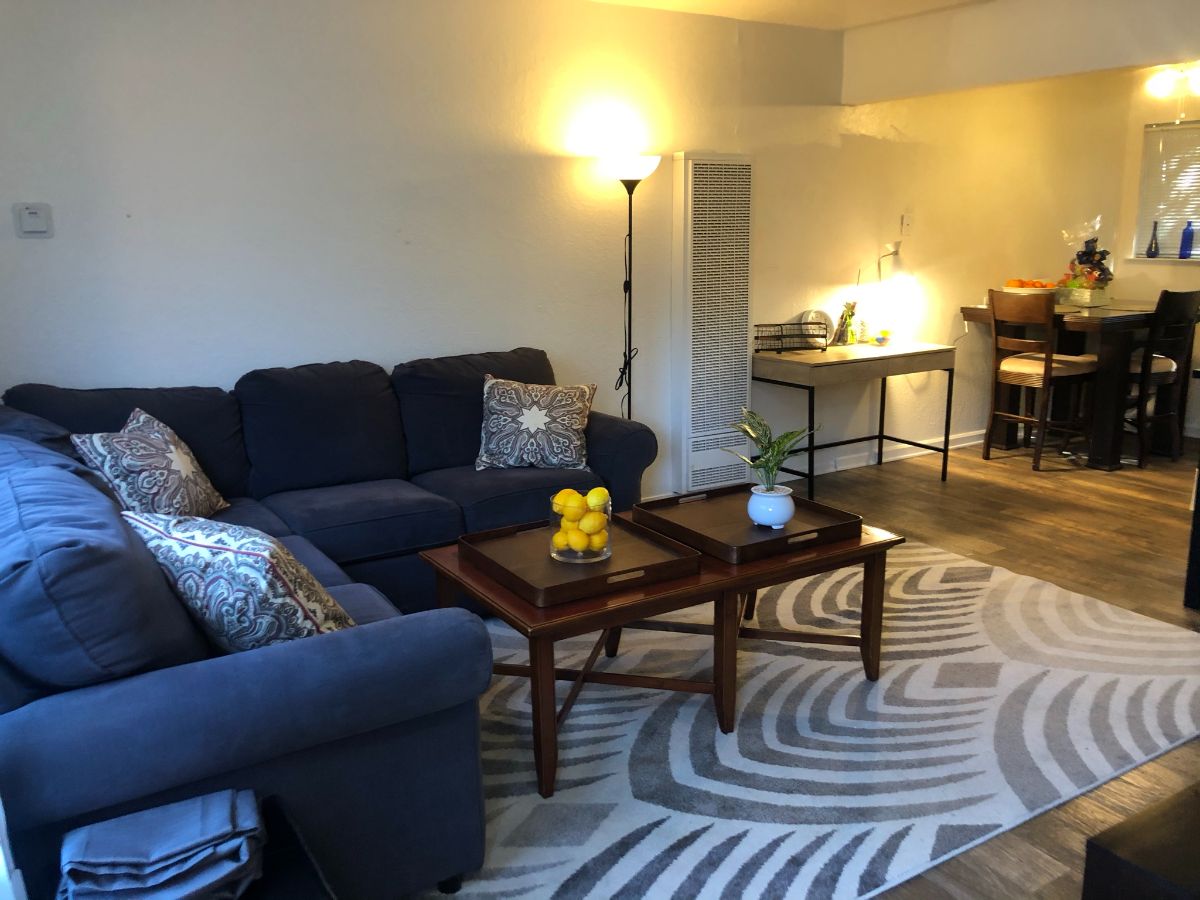 Kayley is mother to three-month-old son, Alijah; Kayley's mom, Renee, is also now living with them. Alijah's Dad passed away less than a year ago while Kayley was pregnant. No longer able to afford the rent on her own, Kayley couch-surfed at friends’ homes, then rented a room in a house. When a fire destroyed the house, along with all her belongings, she was again homeless. After Alijah was born, Kayley stayed with her mother in a hotel room until they were finally able to find their current apartment.

Our Welcoming Home team visits the family in their living room and talks with them about their needs. The same room at the end of the "Welcoming Day" is an inviting space for them to gather. A "new" desk provides Kayley with a perfect space to work from home as a collections agent.

Pictured above are the two bedrooms before and after our volunteers worked their magic. Kayley shares her room with Alijah; the second room is for Renee, Kayley's Mom. You can see Mom and daughter both said they loved red and black and thoughtful donors gave them just what they asked for. Note that there was no storage for clothes or other items before we arrived.

As you can see, the kitchen is small and didn't provide much storage space, either. Thanks to donated modular storage, the space is now neatly organized.

With space to actually store things now, there's room for a dining table and chairs by the window. No more eating on the couch!

Any extra room is helpful. The family now has a cheery, plant-filled outdoor area, complete with a brand new barbecue and charcoal to feed it. Ready for summer!

Kayley, son Alijah and Renee settling into their new home. They were amazed and grateful when they saw their "new" apartment. Alijah had a bewildered look on his face, as if to say "is this the same place?"

Rachelle is a widow and mom to eight-year-old Jolene, Her husband passed away from a massive brain aneurysm about two years ago. Because Rachelle was unable to support them, Jolene was placed with friends with whom she still lives. Rachelle went to a shelter. At one point, Rachelle was able to move out of the shelter into a room at a “community living floor” over a restaurant. The bathroom was shared with the other tenants on the floor. Soon after she moved in, the landlord raised the rent to $2,200 a month—which, of course, she couldn’t afford. So, homeless again, she returned to the shelter. Eventually, with the help of Catholic Charities, Rachelle was able to find her own apartment. Rachelle plans to get her certification as a home health aide, a job she has held in the past, and return to work as soon as she can.

When volunteers visited three weeks earlier there was virtually no furniture in the apartment. This cheery living room was created with a donated sofa bed for Jolene when she comes to visit mom for a sleepover. A donor provided a console for Jolene to use as her dresser. On the "new" coffee table, awaiting Rachelle's arrival, is one of the cheery gift baskets made by one of our amazing donors!

This comfy, brand new bed was purchased from cash donations. The new comforter in Rachelle's favorite color was hand-picked by a thoughtful donor. Volunteers created a calm and restful retreat for Rachel. The donated desk provides a useful study area where she can work on her certification.

The kitchen was freshened up; a bistro dining set and framed art were added to create a sit-down dining area for Rachelle and Jolene. Grocery shopping will be a easier now with the new shopping cart a generous donor provided, since Rachelle doesn't drive.

What a difference a cheery new shower curtain and some storage shelves makes!

When Rachelle returned to her apartment she was greeted by this bright wreath on her front gate. While she walked through the transformed home she expressed her thanks enthusiastically to the whole team!