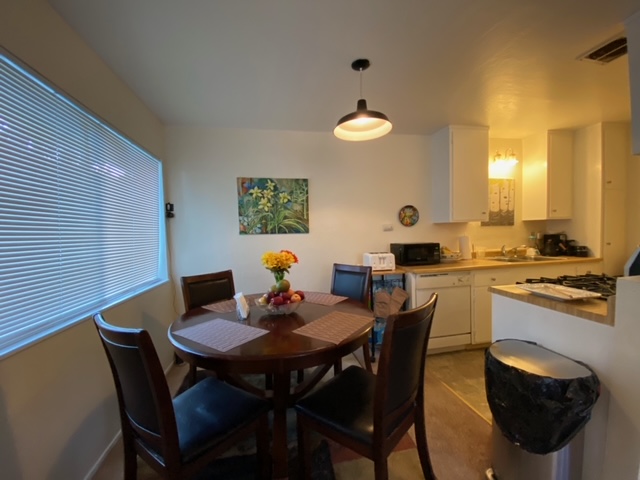 Our March Marin 'Welcoming" was quite remarkable. For the first time we fully furnished and outfitted not two, not three but four apartments all in one day! Early on March 13th volunteers began receiving dropped-off items at the beautiful site of St. Luke Presbyterian Church and boxed them up for each apartment. Then, about noon, our terrific partners - Birch Circle Moving and North Bay Moving Company - arrived with all the heavy furniture items. We added the lighter items to their loads and they headed to each of the four homes where that afternoon volunteers helped them unload and then set everything up in the apartments.

Read the stories of each of our four families/individuals and view the "Before and After" photos of their new home settings.

Fleeing a domestic violence situation, Maritza, with her three boys, Claudio, Jade and Elias, rented one room in a house with friends for two years. Then, with help from the Center for Domestic Peace and North Marin Community Services, the family was able to rent a one-bedroom apartment where the four of them now share a bedroom. Even though it's small, they are thrilled have their own place. Maritza works full time as a house cleaner. She is also trying to pick up extra work in addition to her 40-hour a week job so that she can more easily pay the rent. She plans to study English online so that she can improve her employment prospects.

With your donations, our afternoon volunteers organized and spruced up Maritza's dining room and created a lovely space for the family to gather for meals.

Having this sunny living room to relax in feels quite luxurious to Maritza and her boys after two of them had been using it as a bedroom. Volunteers also created a sleeping area out of part of the room as Maritza has to rent it out to be able to afford the rent.

New bunk beds and comforters with the boys' favorite characters make sharing their one bedroom comfortable and roomier. There was even space for a small desk and dresser.

The family was thrilled when they arrived to find their new transformed home. And...they loved the Welcoming Home Basket filled with treats that was created by a thoughtful donor!

Victor is a jewelry artist in his early 20’s. Two years ago his life changed dramatically when he was shot in the back without provocation. He spent months in a wheelchair and had to learn to walk again. Since he was disabled for such a long time, his savings were drained. He was finally able to get his own apartment through the assistance of Marin Housing Authority and is grateful to finally get a new start.

Victor had modest requests for furniture and household goods. He preferred that his living/dining area be his jewelry making studio so he asked for two wooden tables, floor lamps to light the area, a couple of swivel desk chairs and a few other items. He didn’t want a sofa—just things he could use in his studio.

Two new art aprons hang ready for use. Even though Victor didn’t want a sofa, we managed to give him a comfy armchair, thanks to a generous donor.

Our volunteers transformed a very sparse bedroom into Victor's 'man cave'. Since he's using the living room as his art studio, he can watch TV, read and relax in his bedroom.

Two thumbs up  from Victor when he saw his brand new jewelry desk from a special donor. "Oh, Wow," he said.

Tiffany is an amazingly determined and focused young woman. She spent her entire childhood in foster care. She aged out of a group home at 18 and was left to figure out where to go from there. And figure it out she did. She put herself through Cosmetology school but unfortunately developed carpal tunnel syndrome, which left her unable to pursue her chosen profession. Undeterred, she has now set her sights on opening a boutique—perhaps online. Tiffany is so grateful for all the help she has received up to this point; "Every little bit helps so much," she said.

Tiffany's studio/loft apartment is just right for this new chapter of her life...with space to work on her own online boutique project. The framed art in the picture on the right are prints from one of her favorite artists, framed by a creative volunteer. The team created a much needed storage area below the stairs to the loft.

Taking advantage of every possible nook and cranny, we were able to design a living / work area. The area rug, donated by our wonderful, longtime partners at City Carpets, sets off the 'living room' from her work corner. Many warm touches like plants, lamps, bookshelf and storage baskets create a cozy and clean space.

Tiffany's bedroom now feels more spacious and welcoming. She was thrilled with her new blue comforter - her favorite color.

Tiffany was surprised and pleased when she arrived home and saw the transformation of her new little studio apartment. She was particularly impressed with the framed prints of her favorite Japanese artist. "That was very touching of you guys to do that," she said.

Danny is a delightful young man. His parents brought him to the US to escape the violence in their native Honduras years ago. When he arrived here, he was put in foster care because his parents were unable able to take care of him. After aging out of foster care, Danny lived in friends' back yards and then in a park, where all of his belongings were stolen. For a time, he ended up living in a tiny hotel room. During this whole time and up until now, Danny has held down a full time job. Finally, with the help of the County, he was able to find his own apartment, for which he is very grateful. A "friend" gave him some furniture items but they were dirty and in very poor condition. Danny was told that he should be happy with these things because after all, he had nothing to begin with and these items were being given to him for free. With your help we were able to give him a fresh place to make a new start.

Danny said he wanted his apartment to be a peaceful refuge. Thanks to our wonderful donors and creative volunteers, we believe he got just that.

Danny was hoping for a bright, cheery bedroom, and his wishes came true. "Oh, it's so bright," he said. "Now I can actually read in bed!"

Danny was so excited when he saw his "new" place. He went from one room to another, from one piece of furniture to another repeating "Wonderful! This is wonderful!" It was heartwarming to see him so happy. "I have so many plans, so many things I want to do," he said, "and now I can!"